Here is Part #4 of our California Vacation. If you missed Part #1, Part #2, or Part #3 click on the appropriate links. We took a tour bus in San Francisco and learned some amazing facts on what I refer to as the Golden Gate Darling. I just love her… At the end of this post you will see the poem that was created after she was built and beaming for the world to see. 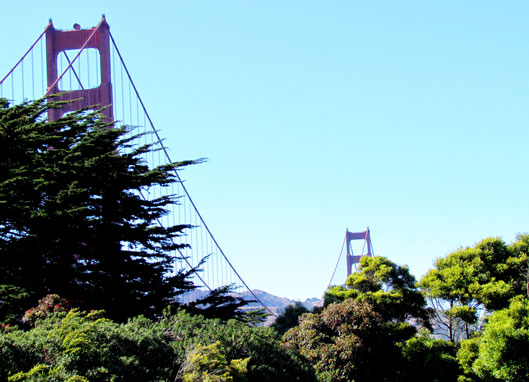 The Golden Gate Strait is the entrance to the San Francisco Bay from the Pacific Ocean.  The strait is approximately three-miles long by one-mile wide.  It is generally accepted that the strait was named “Chrysopylae”, or Golden Gate, by John C. Fremont, Captain of the U.S. Army circa 1846.  It reminded him of a harbor in Istanbul named Chrysoceras or Golden Horn.

Everyone always wants to know how long did it take to build the bridge? Just over four years.  Construction commenced on January 5, 1933 and the Bridge was open to vehicular traffic on May 28, 1937.

Why is the Golden Gate painted “International Orange? The Golden Gate Bridge has always been painted orange vermilion, deemed “International Orange.” Rejecting carbon black and steel gray, Consulting Architect Irving Morrow selected the distinctive orange color because it blends well with the span’s natural setting as it is a warm color consistent with the warm colors of the land masses in the setting as distinct from the cool colors of the sky and sea. It also provides enhanced visibility for passing ships. If the U.S. Navy had its way, the Bridge might have been painted black and yellow stripes to assure even greater visibility for passing ships. 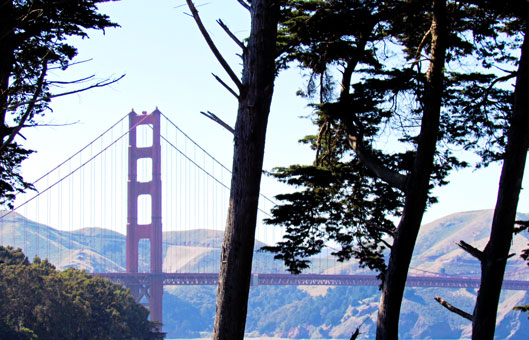 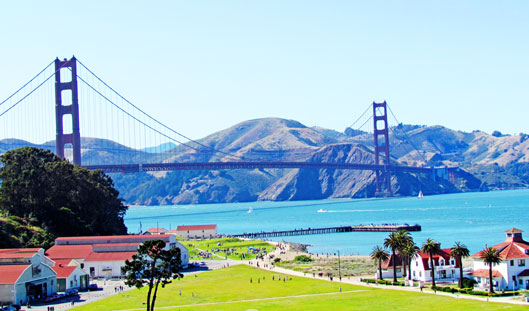 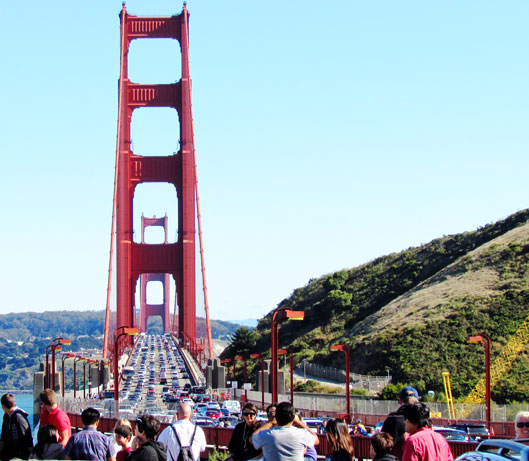 The structure of this darling is just breathtaking!! Can you see the traffic backed up? Everyone is taking in the majestic view!

Okay…here is my favorite picture of the day. My darling children riding on a tour bus with me! Brandon & Stephanie in the middle and Ash & Luke near the front, unfortunately…they are looking back at the Golden Darling. Stephanie looks a little startled…there is a good reason for this. I yelled out…”I JUST LOVE THIS!” Pretty LOUD!! I think she was mortified☺

The Mighty Task is Done

Written by Joseph P. Strauss, Chief Engineer,
Golden Gate Bridge and Highway District
Written upon completion of the building of the  Bridge in May 1937

At last the mighty task is done; Resplendent in the western sun The Bridge looms mountain high; Its titan piers grip ocean floor, Its great steel arms link shore with shore, Its towers pierce the sky.

On its broad decks in rightful pride, The world in swift parade shall ride,                     Throughout all time to be; Beneath, fleet ships from every port, Vast landlocked bay, historic fort, And dwarfing all–the sea.

To north, the Redwood Empire’s gates;’ To south, a happy playground waits, in Rapturous appeal; Here nature, free since time began, Yields to the restless moods of man, Accepts his bonds of steel.

Launched midst a thousand hopes and fears, Damned by a thousand hostile sneers, Yet ne’er its course was stayed, But ask of those who met the foe Who stood alone when faith was low, Ask them the price they paid.

Ask of the steel, each strut and wire, Ask of the searching, purging fire, That marked their natal hour; Ask of the mind, the hand, the heart, Ask of each single, stalwart part, What gave it force and power.

An Honored cause and nobly fought And that which they so bravely wrought, Now glorifies their deed, No selfish urge shall stain its life, Nor envy, greed, intrigue, nor strife, Nor false, ignoble creed.

High overhead its lights shall gleam, Far, far below life’s restless stream, Unceasingly shall flow; For this was spun its lithe fine form, To fear not war, nor time, nor storm, For Fate had meant it so.

Even after seeing her in REAL life and reliving it now…I still feel like it is surreal that she exists! I hope someday to revisit her again♥

Have you visited the Golden Gate Darling?
What was your mode of transportation to get across her?

Have a Great Day…Take a Deep Breath and Dig In Little by Little!
Laurie
XXOO