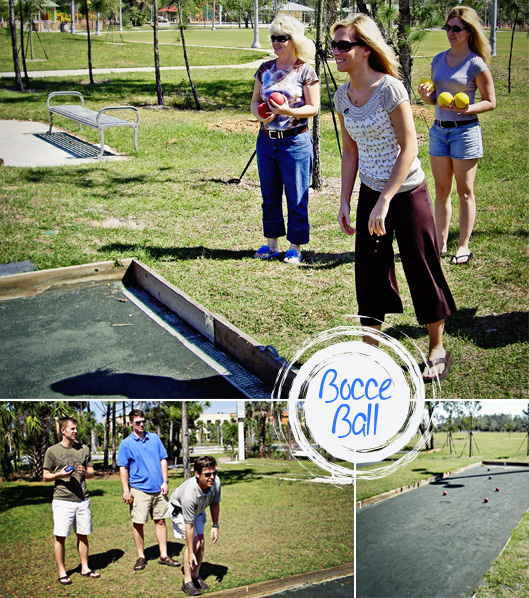 Italian bocce ball sounds much better. Girls vs. Guy for a fun bocce ball tournament, so game on! Nothing like a bit of friendly competition between the two sexes determined to get the upper hand. I love the competition in our family. We all are pretty good spirited about the whole winning and losing thing, we take it all in good fun! Family…is what it’s all about! Just being together and enjoying the moment no matter what it is? PS…if you were wondering…THE GIRLS WON!!♥

{fam*i*ly} – A Circle of strength, one of nature’s masterpieces, forever.

Bocce is played with 2-8 players. All bocce sets have different colors and designs. Each bocce player should use a color or design that is unique from other players so that each players ball can be easily distinguished.

A player is chosen at random to throw the pallino (the small ball) which is the first ball put into play and is thrown underhand. Whoever throws the pallino will put the first bocce ball into play. The first ball thrown is considered to be “inside.” Meaning the ball closest to the pallino. All other players should take turns throwing until one of their bocce balls gets closer to the pallino than the “inside” player. After all balls are thrown the person that is closest to the pallino will be awarded 1 point for each ball that is closer than the closest competitor’s ball. Play continues until one person reaches a score of 12.

The beauty of open bocce ball is that the only rule is to have fun.

The game is so popular it even has a drink named after it…
The Bocce Ball is great highball juice drink. With the amaretto and soda it’s much like a Screwdriver on steroids, and is a very interesting cocktail. I would include the Bocce Ball on the list of drinks most bartenders will want to be aware of. Also, because of its relationship to the Screwdriver, it an easy one to remember.

You can also buy an inexpensive light-weight plastic set that I found at the Target Store. It is great for play on the beach, which would go so well this refreshing drink…wouldn’t you say?

Have you ever played Bocce Ball? Was it on the hard surface court or on the soft yard/sand surface?

Thank you for joining us today at P.I.P.~ We know your time is precious☺

If you are not part of the Pride in Photos family, please take a moment to join the fun!  Click on the follow email button on the top right hand corner.